On a beautiful Saturday afternoon, you craved for some food but you are too lazy to get off the couch because you're binge watching Narcos Mexico and your boyfriend is too lazy to go out tapao for you. You contemplate on strangling him but fret not because LuckyBoy Delivery Service might be the savior of your
hungry soul. LuckyBoy Delivery Service Bintulu is a delivery service that has a surprisingly large selection of menu from different restaurant as of writting
To install their app, you would need Wechat application for your IOS or Android phone. Scan their QR code and go into the chat session to view their menu.

Click the Food.Drink to see all their menu items. If you have any inquiry you can click on the pink icon on the lower left to chat with them.

I ordered T4 but was unsure how to add pearl to my drink so I click on the little pink icon and have my question answered on the spot. You just need to put in the remark during payment for additional request. Delivery Fee is an additional RM5 for every merchant. If you ordering from two differing restaurant, you will be charged RM10. However for Kidurong area the delivery fee is RM8. Pretty reasonable for lazy people like me.

Delivery took half an hour and the drinks was still cold, couldn't complaint much.

Hi gang, I know it has been a while. After several years of going into hybrid, I have decided it is time to dust off the life long passion of eating into something much more exciting. So if I haven't bored you yet, head on over to GoBintulu.com to discover the eight wonders of Bintulu.
Posted by Eater at 3:12 AM No comments:

Hi all, it's been a long time since I blog much but rest assured as something new is coming. Check back soon for something exciting!
Posted by Eater at 8:38 PM No comments:

Beyond Veggie By Secret Recipe Bintulu

Beyond Veggie By Secret Recipe is an intriguing spot recently opened at Bintulu Sentral (Google map still showing a jungle path but it is located just around the corner of Digi). As the name suggest it is a vegetarian themed restaurant by Secret Recipe which we dropped by last week to have a try.

Vegetarian restaurant has always been the sort of ignored places as I find it largely ironic that these restaurants serve dishes made of vegetable to resemble or taste like poultry. I am puzzled whether people who do not want to eat meat due to religious belief or to end animal cruelty wants to actually get a taste of it? For now I will just leave it at that but being it from Secret Recipe I was curious to find out what is actually being served? 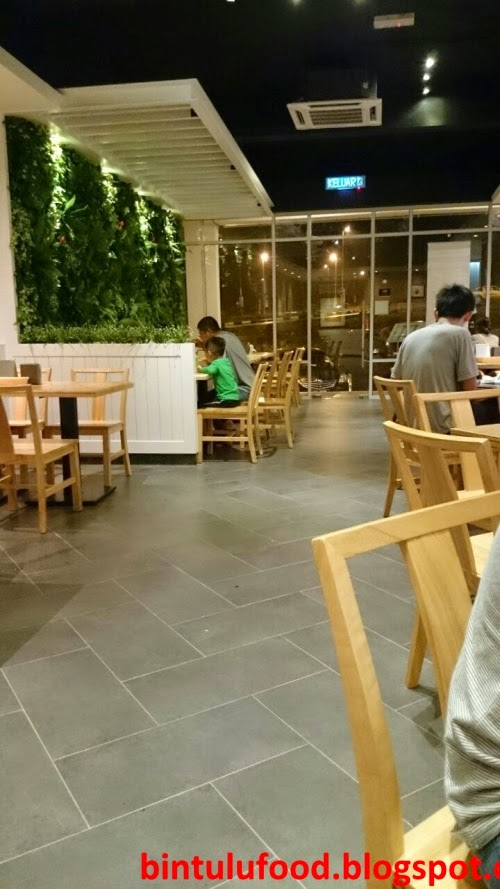 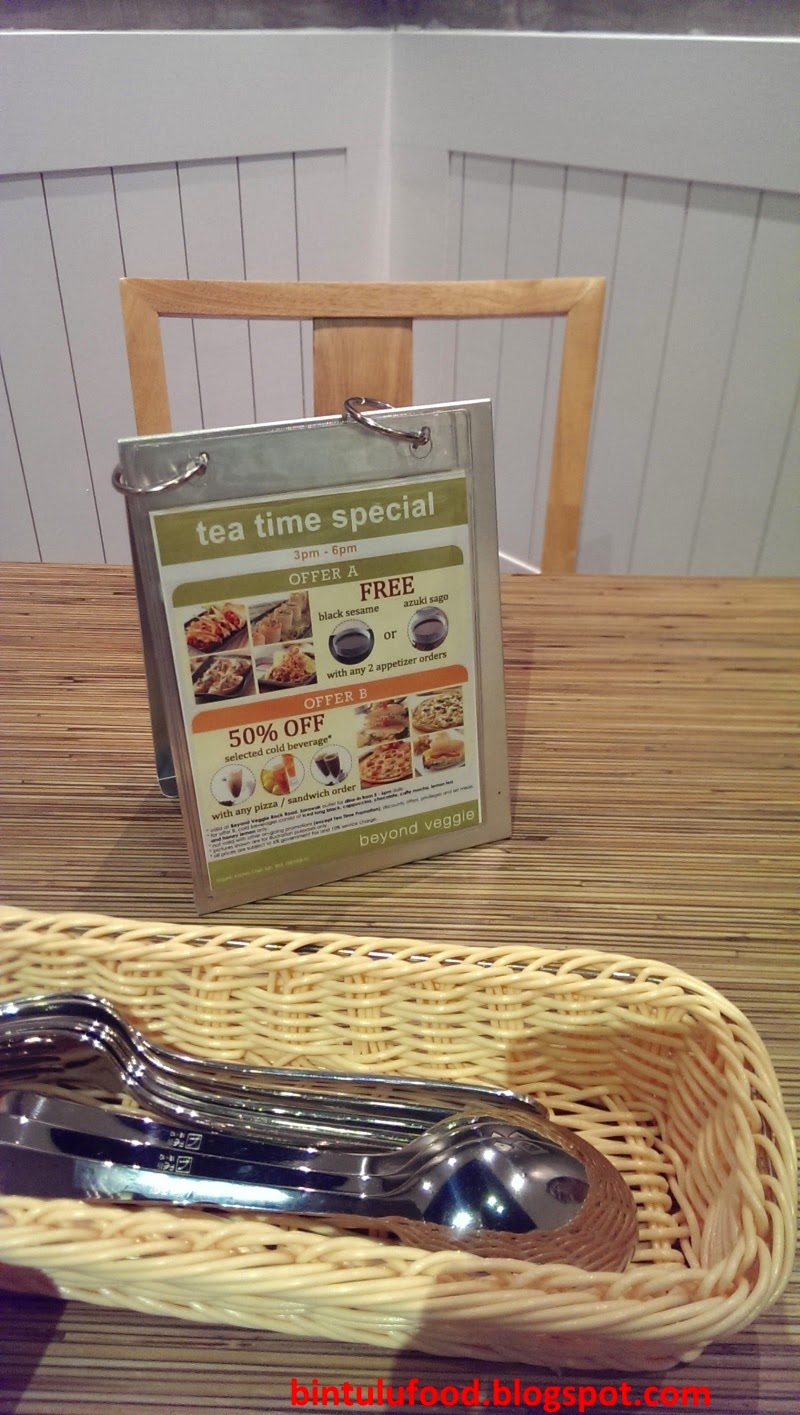 The restaurant has a relaxing feel to it mostly due to it's lighting placement with dark ceiling for a chill hangout plus the night we arrived there was only two tables occupied which was surprising considering most new restaurant is swarm with people. We were served immediately with a green menu, there is a selection of dishes that could be found from the original Secret Recipe however those dishes with meat or prawn are being substitute with vegetables. Things that I found interesting are the variety of appetizers like mushroom done in different style and sauces, yam basket, spring rolls and there is a slew of choices for fried rice and noodles cooked with some different kind of vegetables. Then there is also the dessert which I find pleasing apart from their cakes (most are not found at Secret Recipe) are the new addition of cendol or shaved ice and sago. 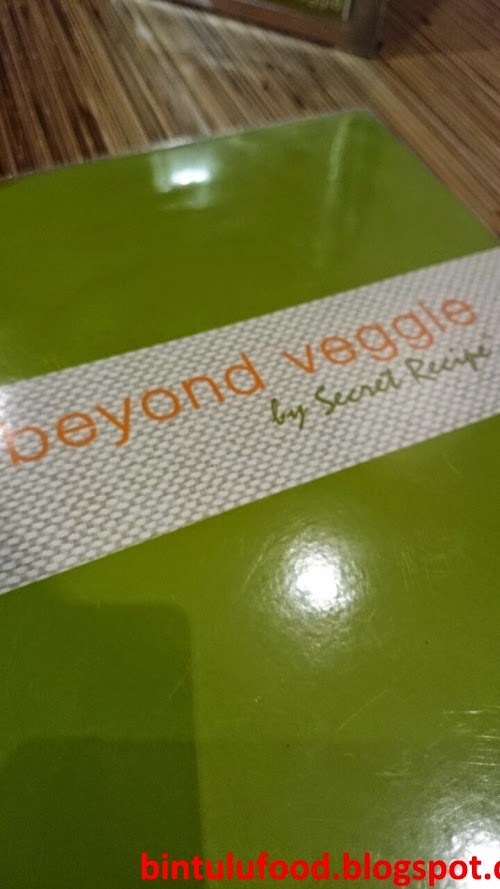 We made our orders and less than fifteen minutes the foods are out. 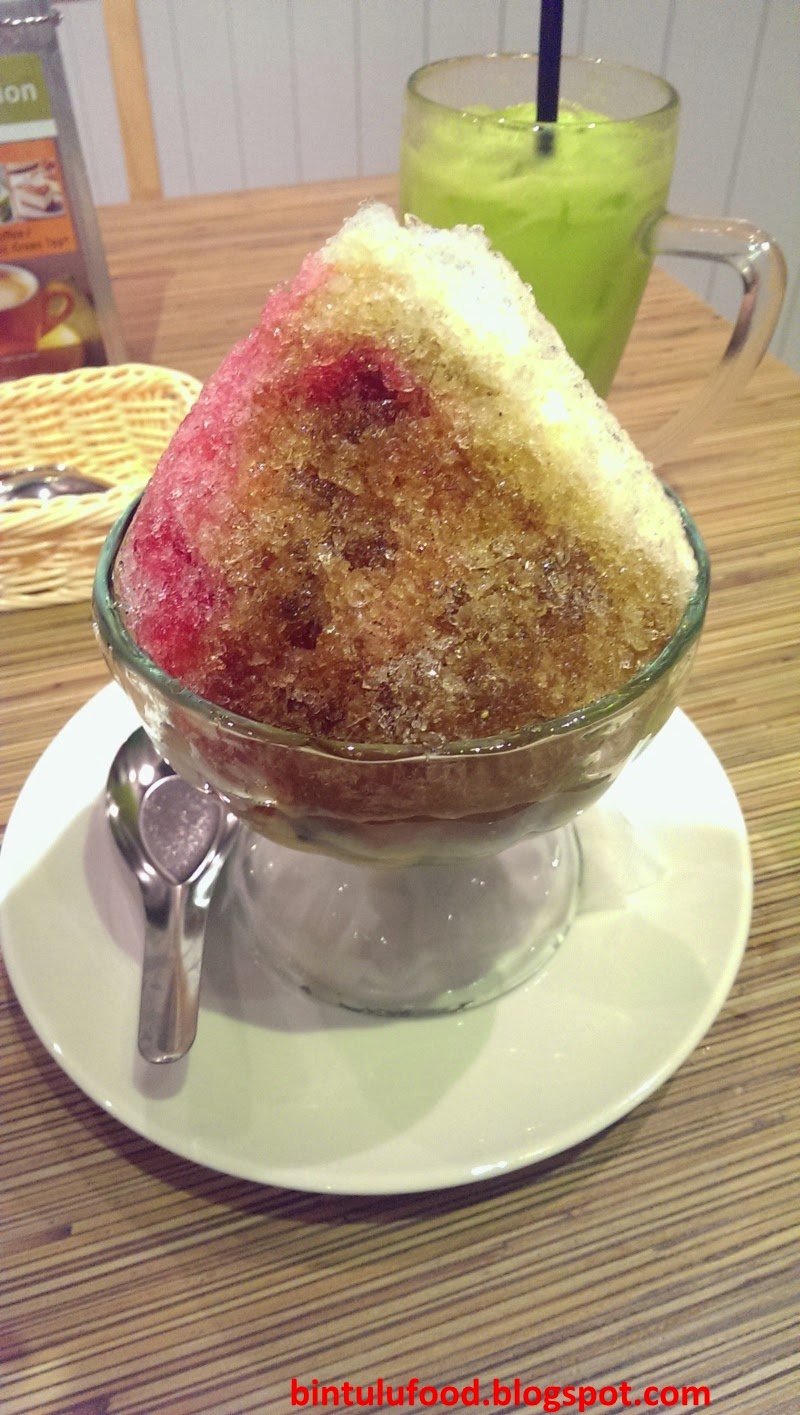 The Snow Mountain which cendol shaved ice looks good but unfortunately lacks the taste, it taste pretty watered out as they used too little condensed milk. 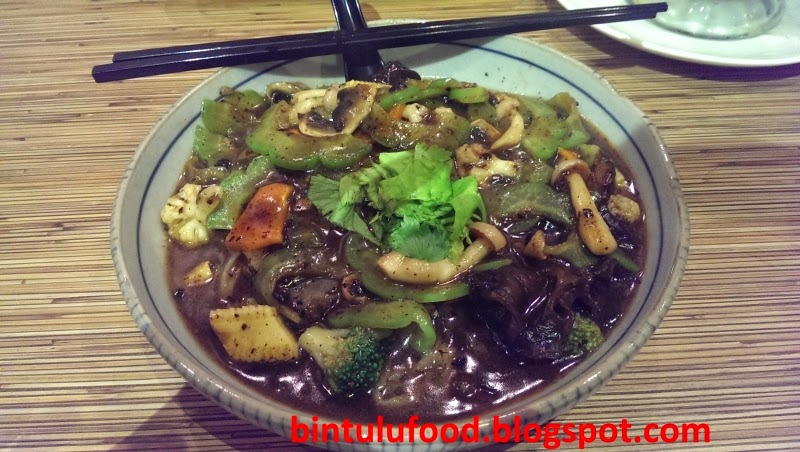 Mushroom is the new meat


Kueh teow with bitter gourd, as the name would suggest is quite bitter which came in a large bowl with black sauce that tasted a bit herbal but I couldn't make out what it was. A very large potion with lots of mushroom however overall I do not find the look or smell too appetizing. 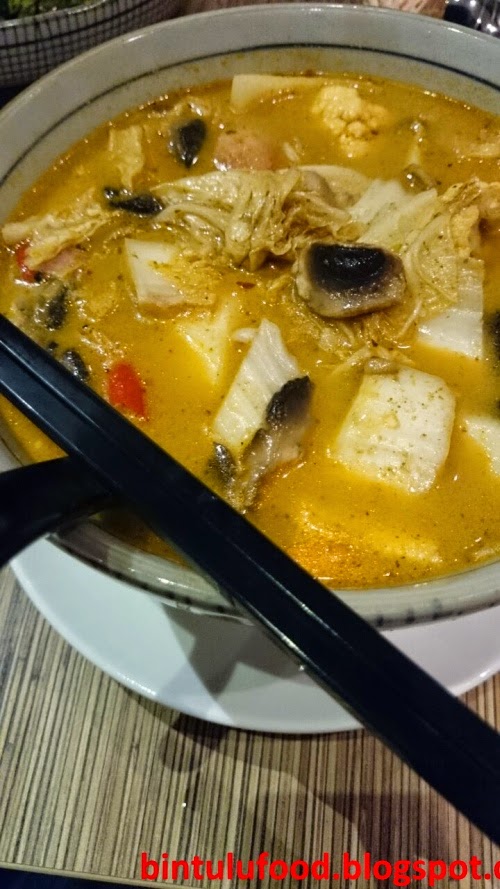 Tom yum without the prawn


Tom yum soup noodle, Secret Recipe has the same dish however they sub the prawn with mushrooms (mushroom is the new meat here). It lacks flavor due the missing prawn and cuttlefish usually used to give an overall sweet flavor. 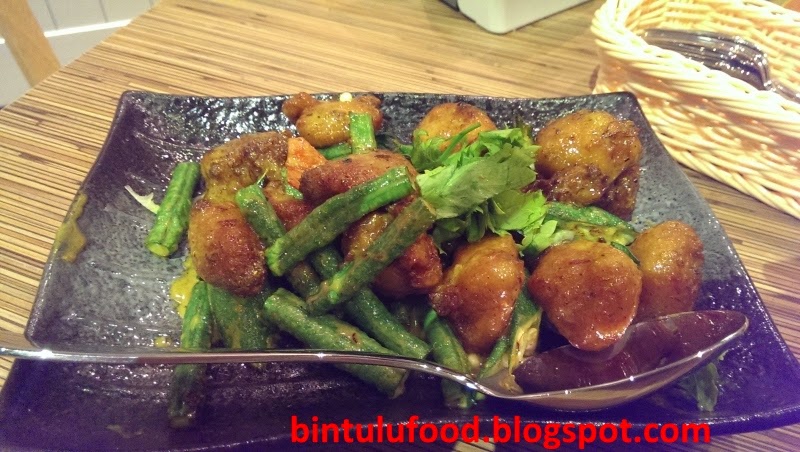 No lion mane was harm in making this dish


Lion mane mushroom, although no resemblance of a lion however it was the highlight of the night. It has the curry flavor yet sweet smell and taste which is mouth watering. To be honest it really taste like meat maybe that is the reason I enjoy it. 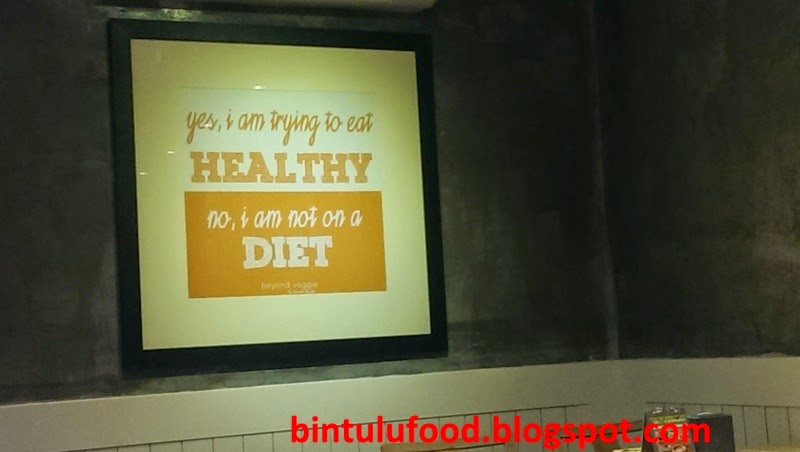 
Overall I do like the place and Beyond Veggie has set itself apart from the tiring western food restaurant in Bintulu. There is a lot of choices that I look forward in trying in the future. Stay tune for future updates.

Kulai Lou Pan Organic Beancurd has been around in Bintulu lately and I had the opportunity to taste it. In chinese we call it  豆腐花 or dou fu hua which is sort of dessert with silky smooth bean curd bath in sweet syrup.

Although there has been the old veteran Jumbo Beancurd in Bintulu for quite some time but Kulai Lou Pan has been the talk lately due to its founder's Seow Sunny antic which I would say is doing him more good than harm. There has also been some edited photos of China new station reporting Kulai Lou Pan containing preservatives which was debunked by Seow Sunny himself. 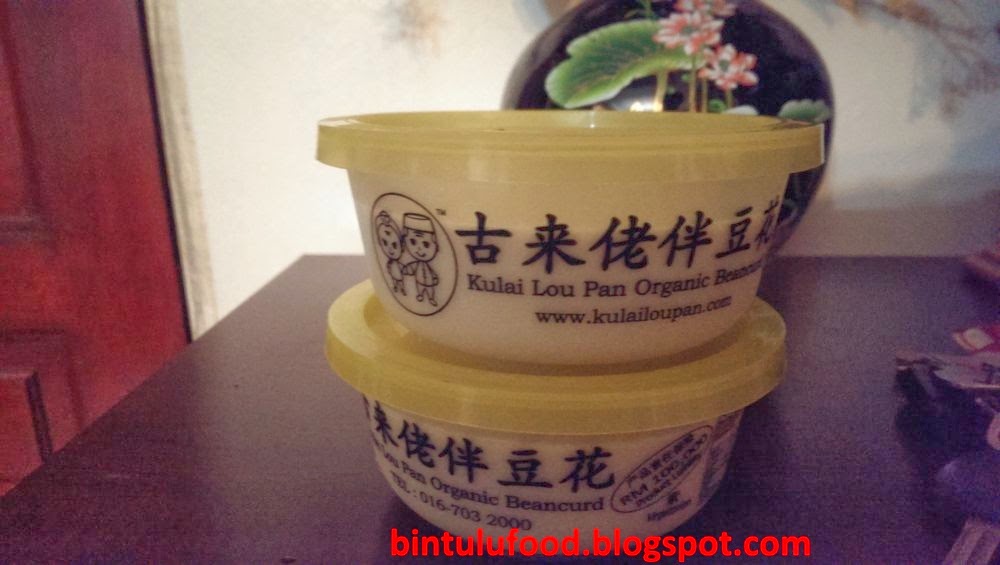 I would say the taste is surprisingly refreshing compare to the normal beancurd I had, imagine having a bowl of caramel which is silky, smooth and melts in your mouth. The taste is soy and doesn't contain too much sweet syrup in it.

Overall it was enjoyable but I don't foresee myself eating these everyday and it comes with the price of RM4.50 which I found a bit steep for just a small portion of beancurd.

We are still here!Although a little busy going about eating everything we can see, stay tune as there will be more updates to come in the few days!
Posted by Eater at 4:08 AM No comments:

ZenQ Dessert Bintulu has recently added a new toast series to their dessert menu which seems quite popular judging from all the hype being posted on Facebook. So I decided to give a go and chosen the Blackforest Danish Toast which they also have Chocolate Banana Honey Toast and Strawberry Lover Honey Toast.


The wait was pretty long around 10 minutes despite we were the only table waiting for our desserts to be served which I can't imagine on a busy day. The toast came in a big plate with fork and knife but because the table surface was pretty smooth, I had a hard time trying to cut through it.

Top with chocolate ice cream, grapes, kiwis and a layer of peanut butter on top of a toast, it was somewhat puzzling to say the least to even consider it creative. The taste if you would imagine is like getting an ice cream bun from those bicycle ice cream vendor for a price of RM2.00 but instead you are paying RM16.90 for it. The mix of peanut spread with chocolate ice cream was not really my preference, it felt there is just too many different things going on with the toast and halfway through it I stopped as I was feeling pretty dreadful like when you load up too much fat and sugar in a filling.

Maybe I did not know what I was expecting but overall in my opinion it could have been good other than ice cream on toast with bombardment of different taste on it.

Eater
We love to eat, let us know any good place in Bintulu and we'll check it out! www.gobintulu.com contact@gobintulu.com

Promote Your Page Too

People Who Ate Too Much!